In my book 'Human Posture' which I published in 2005 there was a section entitled "Environment (need for a new deity)" in Chapter 11 - EDUCATING CHILDREN.

I thought with our global interest in 'Smart Cities', this subject may be worth exploring further. To start with I am simply reproducing material from the book on this subject.

Plate 11.17: … worship the automobile or the Child? We may not be able to do both simultaneously

From ancient times, the place where learning was imparted was carefully selected to provide a measure of peace and calm and to be close to nature. Since religion and learning had close association, monasteries, hermitages and gurukuls (the early Indian boarding schools) where situated on remote mountain fastnesses, on banks of rivers and in forested areas. Since all knowledge is essentially embedded in Nature, it is not surprising that the ancients should have considered Nature to be the best teacher.
But increasingly now we are faced by a new paradigm, where our environment in towns and cities is fashioned not to meet the needs of growing children, or to help form close human bonds between its inhabitants, but to meet the needs of a new deity – The Automobile, which we all worship (Plate 11. 17). Hence the central theme in a modern town are the roads, giving short shrift to such humanizing presence as lakes, rivers, trees and a natural environment.


The environment in which a child grows up influences him profoundly. The multiplicity of roads in a town ensures that children cannot safely go out of their houses, cannot play outside and cannot in general form human bonds with their neighbours. It is not that we have to banish the motor car altogether, but we do have to keep it in its place. With a large section of the human population falling ill due to inadequate physical activity, due to the use of mechanized transport, the design of the environment assumes even greater importance.

The design of cities have become increasingly impersonal and less suited to the character of the human animal… If we design our cities like exotic game parks, then we can expect to see our citizens respond in an entirely different way. 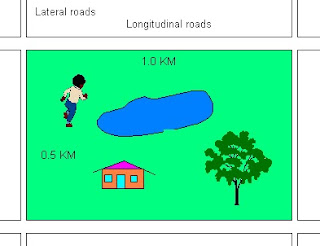 Plate 11.18: Plan of a city with Habitat Zones of 1.0Km X 0.5Km dimensions, where motor vehicles are prohibited; commuting is by cycle or walking. Existing cities can be converted to this form by creative partitioning

In (Plate 11.18) we have a possible solution to this problem; we suggest that towns be planned with vehicle exclusion zones of size about 1Km x 0.5Km; parking of cars to be provided adjoining the main roads, from where people can walk or cycle to their houses, schools, offices, etc. The maximum distance to a road will be 250M from any point in this green zone, not too long a distance for anyone to walk! Let’s say we are talking of a town the size of Bombay, with a population of 18 million, in an area of 450 Sq Km. In this scheme then, there would be 900 green zones. If the size of the city is say 30Km x 15Km, then the Longitudinal Roads, 30 of them would run for lengths of 30 Km and the lateral roads, also 30 in number would each be 15Km long. Imagine how conveniently mass transport systems could be arranged in such a scheme, reducing drastically vehicle usage, associated greenhouse gases; ensuring better air quality and a neighbourhood which is child, adult and nature friendly. Imagine, as a child if you lived in such an environment, the memories you are likely to carry with you when you grow up and move to other locations, as against the memories you are likely to carry of life in a typical city today! It is not necessary that we have to make precise rectangular plots of the type envisaged here; we can convert any existing town into this scheme by creative partitioning.

At the end of the 20th century, humanity is involved in an unprecedented experiment: we are turning ourselves into an urban species. Large cities, not villages and towns, are becoming our main habitat. Urban growth is changing the face of the earth and the condition of humanity. In one century, global urban populations have expanded from 15 to 50% of the total, which itself has gone up from 1.5 to nearly 6 billion. The size of modern cities in terms of numbers as well as physical scale is unprecedented. In 1800, there was only one city with a million people, London. By 1990, the world's 100 largest cities accommodated 540 million people and 220 million people lived in the 20 largest cities, megacities of over 10 million people, some extending to hundreds of thousands of hectares.

Urban agglomerations and their resource uses are becoming the dominant feature of the human presence on earth, profoundly changing humanity’s relationship to its host planet and its ecosystems. The cities of the 21st century are where human destiny will be played out, and where the future of the biosphere will be determined. It is unlikely that the planet will be able to accommodate an urbanised humanity that continues to draw upon resources from ever more distant hinterlands, or which uses the biosphere, the oceans and the atmosphere as a sink for its wastes at the current accelerating rates. The challenge faced is whether cities can transform themselves into self-regulating, sustainable systems - not only in their internal functioning, but also in their relationships to the outside world. Is it possible to make a world of cities viable in the long term – socially, economically, as well as environmentally? The answer to this question is critical to the future well-being of the planet, as well as of humanity. There can be no sustainable world without sustainable cities.

1.1 Cities and the environment

Many of today’s cities function very differently from those we have inherited from history, and relationships with the environment are changing. Low transport costs, based on the ubiquitous use of fossil fuels and facilitated by substantial government subsidies for transport infrastructure, often make distances irrelevant – plugging cities into an increasingly global hinterland. The actual location of settlements is also becoming less important as global trade treaties come to determine the fate of national and local economies. Today, urban dwellers don’t really live in a civilisation, but in a mobilisation - of natural resources, people and products.

The concept of an urban ecological footprint can be used to help illustrate how surrounding rural and natural areas are being affected by cities. Ecological footprint analysis assumes that every category of energy and material consumption and waste discharge requires the productive or absorptive capacity of a finite area of land or water (Wackernagel & Rees 1996). The sum of all land and water required to meet material consumption and waste discharge of a defined population is that populations' ecological footprint on the earth. This does not have to coincide (and often does not) with the populations' home region. Ecological footprint analysis reveals the growing competing demands on natural capital, and it also raises the issues both of equity and the long-term sustainability of production. By establishing the ecological footprint of different life styles, infrastructure, consumption patterns and certain densities separately, it is possible to develop strategies to reduce environmental impacts and the depletion of natural resources. Local Agenda 21 cities are required to list activities to reduce the ecological footprint, while at the same time increasing the quality of life for the inhabitants. Food supplies to cities are an important component of the footprint of cities and a key issue in this context.

Cities require vast areas of land for their sustenance and have come to depend on large amounts of food being brought in from outside the land area they actually occupy. London, for instance, has a surface area of some 160,000 ha. With only 12% of Britain's population, London requires the equivalent of 40% of Britain's entire productive land for its food. In reality, these land surfaces, of course, stretch to far-flung places such as the wheat prairies of Kansas and Iowa, the soybean fields of Mato Grosso, the orchards of France and Spain, and the tea gardens of Assam or Mount Kenya. But this global dependence of Londoners has never been a big issue. Food is there to be bought and enjoyed – the environmental impact of food supplies, including the energy required for food production, processing and transport, is rarely discussed. However, today’s retailing and food distribution systems, relying on motorised transport and, increasingly, airfreight exact a heavy environmental toll in terms of fossil-fuel use, air pollution and damage to wildlife habitats through road building (SAFE Alliance 1994). The largest land surfaces required for feeding cities in developed countries are for producing grains, and animal feed such as maize and soybeans to meet the demand for meat. As countries with huge population, such as China and India, urbanise, worldwide demand for land to feed cities will continue to grow. Sooner or later, cities that have come to take large-scale food imports for granted may need to consider reviving agricultural production in urban areas or the urban fringe to reduce the demand for land surfaces elsewhere.

In a world increasingly dominated by cities, the international community is starting to address the issue of urban sustainability. The process began in Rio with Agenda 21 and continued at the 1996 UN City Summit in Istanbul. The 100-page Habitat Agenda, signed in Istanbul by 180 nations, states: “Human settlements shall be planned, developed and improved in a manner that takes full account of sustainable development principles and all their components, as set out in Agenda 21. ... We need to respect the carrying capacity of ecosystems and preservation of opportunities for future generations. … Science and technology have a crucial role in shaping sustainable human settlements and sustaining the ecosystems they depend upon.”

It is recognised that cities nowadays use too many natural resources and produce too much waste. The ecological footprints of cities are stamping out the habitat of many species. The city’s impact stretches far beyond its physical boundaries. Moreover cities are confronted with an increasing number of people and, therefore, an increasing number of mouths to feed. Along with other initiatives and activities, urban agriculture therefore has an important role in contributing to the future sustainability of cities.

Despite their inherent density, cities do have enormous potential for food growing. Smit et al. (1995) reported that:

The 1980 US census found that urban metropolitan areas produced 30% of the dollar value of US agricultural production. By 1990, this figure had increased to 40%. There are 80,000 community gardeners on municipal land in Berlin with a waiting list of 16,000. Singapore is fully self-reliant in meat and produces 25% of its vegetable needs. Bamako, Mali, is self-sufficient in vegetables and produces half or more of the chickens it consumes. Dar-es-Salaam, one of the world's fastest growing large cities, now has 67% of families engaged in farming compared with 18% in 1967. Presently, 65% of Moscow families are involved in food production compared with 20% in 1970.

These are remarkable figures given the neglect of agriculture in urban planning policy. Planners tend to think that urban food growing is a messy business, and have little understanding of peoples' need to grow food in cities. But for hundreds of millions of urban people, it is a vital component of their livelihoods and during hard times it is an important survival strategy, and city dwellers are increasingly trying to persuade planners to give them space for growing crops. This is true not only in developing countries, but also increasingly in the developed countries, particularly in cities where unemployment is endemic. In addition, many people like to spend part of their time growing things as a leisure pursuit. In times of crisis, like war or recession, growing food in cities has always been …
http://www.danangtimes.vn/Portals/0/Docs/101093051-Theme2.pdf